Blog - Latest News
You are here: Home / About Us / Press & Media / News / Five Griz Days events you should not miss 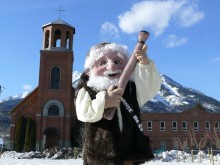 The Griz Days winter festival is coming up this weekend in Fernie, when the whole community pays homage to the snowmaking powers of the Griz.
Local legend has it that the Griz is a giant man who lives in the Lizard Range above Fernie Alpine Resort and brings the powder snow that makes Fernie one of
the top ski resorts in Canada.

Combine a ski weekend in Fernie with one of these great Griz Days activities – don’t forget to drop in to Fernie Vacation Properties real estate office at Timberline Lodges 1-5pm Friday and Saturday.

Find out more at the Griz Days Facebook page

1. Wear your Griz Pin – or risk arrest!
Griz Pins are now on sale around Fernie – $3 each of two for $5. These collectible pins are your ticket to freedom during Griz Days – as long as you are wearing one, the Griz Sheriff won’t arrest you, but beware the sheriff and his deputies if you are caught without one – you don’t want to spend your ski weekend in the Griz Jail!

This year the Griz pins also act as your ticket into a draw to win $1000.

Shred Kelly is one of those bands that will get the whole family dancing – and they are headlining at the CP Station Square stage on Friday night.

The stage will be packed with performers from 6-10pm – also lined up for your entertainment will be the preliminary stage of Commit Rail Jam competition.

Downtown Fernie becomes a celebration as businesses and community groups parade along Second Avenue in honour of the Griz from 6:30pm – it’s a great way to round of your ski weekend at Fernie.

As this is Fernie Alpine Resort’s 50th anniversary, the parade will include historical snowcats and vintage grooming machines.

The parade will be led by honorary parade marshalls Linda and Heiko Socher, the former owners of the ski hill who are credited with building it up from a small community hill to being one of the top ski resorts in Canada.

Afterwards, there will be a family firework display, dance performances, music and the Commit Rail Jam finals.

The Griz represents Fernie’s best qualities – fun-loving, at home in the outdoors, and someone who will do anything to get to Fernie’s fantastic powder.

Cheer on the contestants at the events on the ski hill and around town, and see the Griz crowning ceremony after the Griz Days parade on Saturday.

The aim of the game is to create an unmanned craft that can slide down the mountain and get air off a kicker in the most imaginative way.

Come along and watch how much carnage this year’s contestants can create.