Blog - Latest News
You are here: Home / About Us / Press & Media / News / Five reasons to have a March ski vacation in Fernie 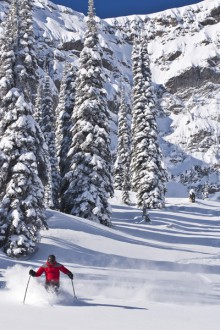 1. Events to celebrate 50 years of skiing in Fernie this March

March 19-25 2012 is Fernie Ski Heritage Week, when events on and off the mountain will celebrate the 50th anniversary of Fernie Alpine Resort, which opened in 1962 as Fernie Snow Valley.

You can look forward to retro ski movies, an exhibition of old ski equipment at Fernie Museum, a social for ski pioneers and a panel discussion on the past, present and future of skiing in North America, as well as many special events by the local bars and stores.

2. The warmer side of winter

The average temperature in Fernie in March is 0.5 degrees Celsius – compared to a toe-chilling minus 6.8 degrees in January.

You have a good chance of catching some sunshine and even taking off a few layers in the afternoon, when the average high temperature is plus six degrees.

But, once the sun goes down it drops to an average low of minus five degrees – the perfect temperature to sit in the hot tub at your slopeside condo and watch the fresh snow falling ready for tomorrow’s skiing.

The March monthly average snowfall is 38cm – so you get to ski Fernie’s famous powder snow without the cold temperatures of the early season.

The ‘Fernie Factor’ means that snowfall can vary widely from the forecast – it’s very common for Fernie skiers to go to sleep with 5cm forecast, and wake up to 15cm fresh snow.

That’s why a lot of local businesses obey the 20cm powder day rule – if there is 20cm fresh snow overnight, nobody has to work until noon so they can get out and enjoy some fresh tracks.

Did you know? The 2012 Farmer’s Almanac is predicting heavy snowfall in March for South BC this year.

Ski Canada magazine has announced it will bring its famous Ski Canada Test to Fernie Alpine Resort in March 2012.

More than 40 hardcore ski testers from across Canada, and beyond, will descend on Fernie from March 19-25 2012 for five days of testing in the categories of Expert and Adventure All Mountain, Big Mountain, On-Piste Cruisers and Easy Cruising.

Skis from more than a dozen manufacturers, including K2, Salomon, Volkl, Elan, Atomic, Rossignol, Head, and Fischer, as well as several smaller brands favoured in specific markets will supply their not-yet-released 2013 skis to be tested and rated against one another.

So, if you are gear-savvy and want to know what all the major ski manufacturers have in store for us in 2013, get a sneak preview during test week.

5. Fun events planned on and off the slopes

The events team at Fernie Alpine Resort has some great events planned this March.

Sunday March 4 is the annual Raging Elk Dummy Downhill race. Watch as dummies of all shapes, sizes and themes get sent flying down a slope and off a kicker – they are judged for the creativity of the design,

Saturday March 10 sees the Griz Kidz Carnival come to Fernie Alpine Resort, with games, entertainment and competitions to get your whole family excited for skiing.

Fernie was the film location for Hot Tub Time Machine, the ski movie that went back in time to revisit retro ski fashion and culture. We are celebrating those one-piece snow suits, spandex neon leggings, leg warmers and teased hair with the Retro weekend on March 17, sponsored by Kokanee and featuring the Kokanee Glacier Girls and Rocswell DJs.

New this year, Fernie has partnered with the newly formed BC Telemark Association to bring a Telemark Ski Competition to Fernie on Saturday March 24.

Almost one metre of snow in 24 hours at Fernie!

Become part of the next 50 years of skiing in Fernie

The latest news from Fernie BC – almost 1 meter of new snow in the past... Champagne snow in Fernie – caught on camera
Scroll to top